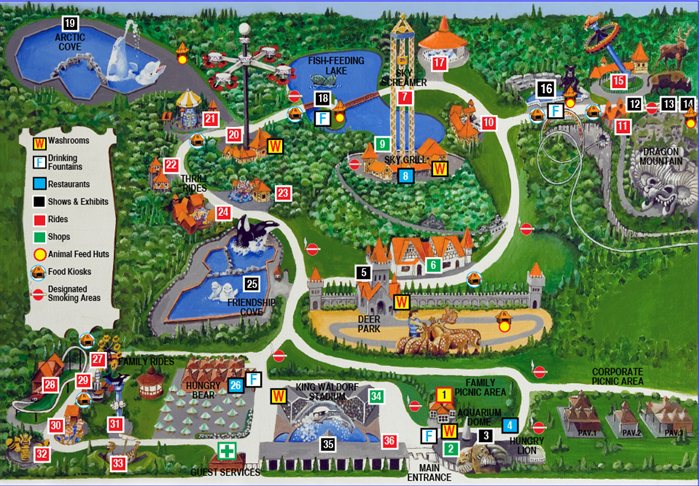 Marineland is a famous tourist destination and is both a themed amusement as well as an animal exhibition park located in Niagara Falls of Ontario, Canada. Marineland is among the major tourist attractions in Niagara Falls due to its closeness to the famous waterfalls and some other natural parks in the area. It’s also well-known for its variety of animal attractions and its collection of fun and exciting rides.

One part of Marineland is used for its animal exhibits. There are a lot of exhibits to view in Marineland and guests will surely have their fill of animal cuteness as they visit the shows. Some of the most famous exhibitions include the Friendship Cove, which currently holds the record for the largest whale habitat in the world for observing orcas both above the ground and below. There is also the Arctic Cove, which features a number of beluga whales. Park visitors have the chance to feed and pet the whales for an additional charge. Marineland presently holds the world record for most number of beluga whales, a total of 41. There is also the King Waldorf Stadium Exhibit which mainly features sea lions, bottlenose dolphins and walrus.

The other part of Marineland is dedicated to fun and thrilling rides for the whole family. Dragon Mountain is a roller coaster which previously held the record for world’s largest non-stop roller coaster ride, spreading at 30 acres. Sky Hawk is a spinning ride that uses cages without any belts or harnesses. Magic Experience is another spinning ride. It features a number of bear statues on the ride. Flying Dragon is a ride for those looking for an adrenalin rush. The ride flies up into the air and then falls back down quickly with no inversions. Sky Screamer is currently the tallest triple tower ride in the world, standing at 91.4 meters. It stands above a 150-foot-tall hill, thus making its total height 450 feet, giving riders an extraordinary view of the falls and the city.

There are also some fun rides available for the children. Orca Screamer is a small, child-sized version of the famed Sky Screamer. Another one is the Bumble Bee, a brightly colored ride where parents and kids can sit together. Ocean Odyssey is a family ride where guests can sit in fish-shaped cars attached to huge arms. The cars spin in a circle as the arms go up and down. For more information, please visit Marineland.