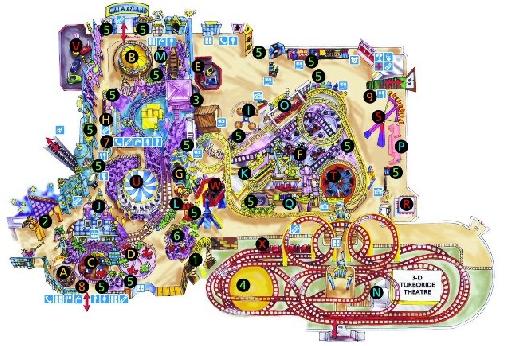 Galaxyland is the second biggest amusement park in the world. Located inside West Edmonton Mall, an establishment in Alberta, Canada, it was the biggest indoor amusement park until November 2010, when Ferrari World subsequently took away this title.

Galaxyland was previously known as “Fantasyland” amusement park. However, the title Fantasyland already belonged to Disneyland at that time, along with the other amusement parks operated by the Walt Disney Company. A lawsuit ultimately forced the owners of West Edmonton Mall to replace the park’s name. Fantasyland became known as Galaxyland in July 1995. The change of name was launched along with the new “space age” theme. It also marked the arrival of Cosmo, the new mascot.

Adrenaline enthusiasts are in for a treat at Galaxyland. This famous park houses the notorious 14-story high “Mindbender”, the longest and tallest indoor roller coaster in the world and is also Galaxyland’s main attraction. This record-setting ride was designed by Werner Stengel from Germany and was constructed by Anton Schwarzkopf. Mindbender was inspired by Dreier Looping, another roller coaster also designed by Werner Stengel. It is intended to somewhat replicate Dreier Looping although the former is definitely taller. Also, it uses shorter trains and three pilot cars while Dreier Looping normally uses five trailer cars along with a single pilot car although sometimes, it also increases its trains to seven-car units when being used in busy seasons.

The ride’s exciting layout includes a lot of twisting drops, double upward helix and a three vertical loops finale. The ride is able to twist underneath, around and even in between its supports. Mindbender used to drop below the “UFO Maze” during the helix but the latter has been dismantled to make room for a newer, more exciting roller coaster, the Gerstlauer’s Galaxy Orbiter. If these drops, twists and turns are still not enough, a guest can try Mindbender during the high seasons when the last car is reversed so that the guests are able to take a ride in the roller coaster without seeing where they are heading.

Thrill seekers will find much to love in Galaxyland. In fact, aside from mindbender, it also contains another record-breaking ride, the world’s tallest tower ride, the “Space Shot”.

Teenage guests and the young-at-hearts will surely be satisfied with the advanced rides in Galaxyland, such as the “Galaxy Orbiter”, “Swing of the Century”, “Solar Flare”, “Cosmic’s Space Derby”, “Space Shot”, “Sonic Twister” and, of course, “Mindbender”.

For the younger ones, they will certainly have so much fun with Galaxyland’s many rides designed for preteens. This includes Cosmic Spinner, Dragon Wagon, Galaxyland Express, Cosmic Bounce, 3-D TurboRide Theatre, Flying Galleon and Autosled.

Galaxyland is a wonderful amusement park that families should visit. After a long and exciting day at the park, the whole family can also enjoy some shopping or dining in the shops inside West Edmonton Mall.