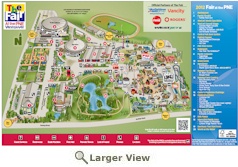 This amusement park is located in Vancouver, Canada. Considered as the oldest amusement park in the country, it is situated in Hastings Park and is home to thousands of visitors annually. It is a very dynamic park with new rides replacing old ones every year.

The residents of Vancouver visit the park to attend the annual fair organized by the company and its partner, Pacific National Exhibition. This fair is an interesting event in which visitors are able to enjoy talent shows, monster tracks, animal races and varying types of food and snacks. The rides within the amusement park are doubled during the event to include several others brought from west coast parks.

Several films including “Rollercoaster” were shot at this amusement park. Another film is the “Final Destination 3” which is said to have been shot during its initial stages here. The park’s roller coasters provide perfect scenes to produce quality films with a lot of public attraction.

The attractions that are found in Playland include three roller coasters and several other main rides. The roller coasters include Wooden Roller Coaster, Corkscrew and Kettle Creek Mine. Opened in 1958, the Wooden Roller Coaster is 20 m high and has a speed of 76 km/h. This coaster was used in the production of the movie “Riding the Bullet”. On the other hand, Corkscrew roller coaster was launched in 1994 and has a double corkscrew and was used in the shooting of the movie “Final Destination 3”. Kettle Creek Mine was opened in 2004 to represent a family coaster. It is in a shape of figure 8 and was built to replace the famous Dragon Coaster.

AtmostFear, Breakdance, Crazy Beach party, Drop Zone, Flume, and Enterprise are a few examples of the park’s many famous amusement rides. The most recent of these rides is AtmostFear which was opened in 2011. It is designed in a 360 degrees swinger-like structure and has a height of 66 meters and is able to swing at a speed of 70km/h. It was manufactured by the Funtime Amusements. Apart from the rides and coasters, visitors to Playland Amusement Park also have other attractions such as merry-go-rounds and helicopters for children, Haunted Mansion and Climbing Wall for the general public.

Indeed, a holiday well spent in Canada, specifically in Vancouver, is that spent with a family, friends and relatives in the oldest amusement park of Canada, Playland. Ranging from the fright nights and fair events to the park’s gallery of rides and coasters, visitors have a lot to enjoy in the park. It’s like a home for happy families and individuals. For more information please visit Playland.