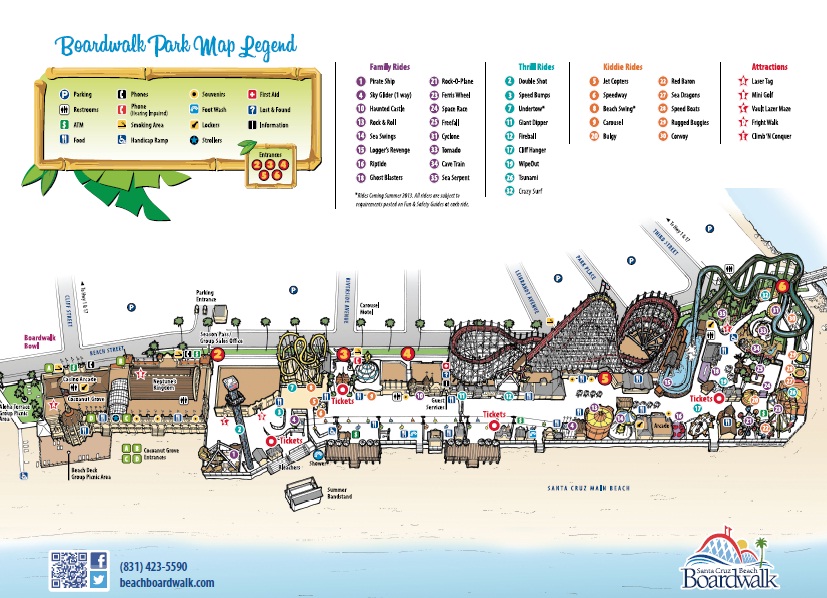 An Oceanfront amusement park, Santa Cruz Beach Boardwalk, is one of the most prominent places in California. The amusement park is considered as the oldest of all and was founded in 1907. It is one among the few parks in USA located by the seaside of USA’s west coast. The park extends right from Monterey bay coast to San Lorenzo River and forms one of the most attractive sceneries in the west coast.

To the west of the park there is a large building famously referred to as the Neptune Casino. The Casino does not offer gambling services as the name seems to suggest. However, Neptune Casino contains an indoor golf course, a conference center, laser tag ground, and a video arcade. All these features make it a very good area for people to visit and enjoy their visit.

The most common ride in the park is the Giant Dipper roller coaster which is located to the eastern side of the boardwalk. Apart from being the major ride in Santa Cruz Boardwalk, the Dipper roller coaster is among the most famous wooden roller coasters in the world. There are also several other dippers including undertow, cave train, Tornado, Tsunami, Logger’s revenge, Sea Serpent, Convoy, double shot, freefall among others. These rides are the most magnificent features of the Santa Cruz Boardwalk. They attract millions of visitors annually and are gaining prominence within California and even outside the city and USA.

The 24-acre park also has old carnival games and snack booths. This feature is situated at 400 Beach Street in Santa Cruz. It is also one of the most attractive sceneries that give the park its fame within and outside California.

Another striking facility within Santa Cruz Boardwalk is the Cocoanut Grove Conference Center. It has banquet rooms and a marvelous venue for performing arts within the amusement park. Within this resort, there are several food and drinks. It also offers theater, making it an exceptional kind of resort within Santa Cruz. Most importantly, the Grove nowadays offers wedding services, banquets, school events and corporate activities. The Sun Room and the Grand Ballroom offer a great deal of space and kitchens provided for commercial purposes within the park.

Since the park is a public amenity, there is no admission fee chargeable. However, there is a parking fee during the periods when the rides are opened. With the need for amusement in a serene environment and holidays become a dream for many families, Santa Cruz Boardwalk has become one of the most prominent amusement parks in the world despite being one of the oldest amusement parks in the world. For more information please visit Santa Cruz Boardwalk.